A cataract is a clouding of the lens of the eye. The lens is normally clear. It focuses light on the retina, light-sensitive tissue in the back of the eye. If the lens is obscured by cataract, vision will be blurred.

The word cataract also means waterfall. People with cataracts may describe the change in vision as being similar to looking through a waterfall. 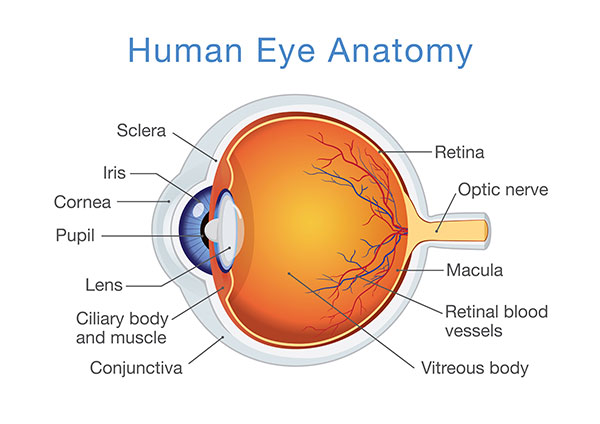 The lens is made mostly of water and protein. Over time these proteins may form clumps that start to cloud a small part of the lens. This is a cataract. Cataracts often worsen and interfere with vision. Cataracts can also cause yellowing or browning of the lens, therefore changing the appearance of some colors. Cataract formation usually occurs in both eyes and is painless. However, in some cases a cataract forms in only one eye.

Most cataracts are related to aging. By age 80, more than half of Americans will have a cataract or have had cataract surgery, according to the National Eye Institute (NEI). Women and non-Hispanic whites are more likely to get cataracts, according to the U.S. Centers for Disease Control and Prevention (CDC). However, they are more likely to cause blindness in blacks.

The NEI reports that people with diabetes are twice as likely to develop cataracts and to develop them at an earlier age. Scientists are not certain why diabetes increases the risk of cataracts, but hyperglycemia appears to be a factor. Other potential complications of diabetes include diabetic retinopathy and glaucoma.

Cataracts can cause secondary glaucoma. They can also interfere with eye tests and procedures such as fluorescein angiography.

Cataracts are a leading cause of low vision among Americans. More than 20 million Americans have cataracts, more than macular degeneration, diabetic retinopathy and glaucoma combined.

Signs and symptoms of cataracts

Cataracts usually develop slowly and painlessly. In some cases, cataracts can develop in an individual who has glaucoma, which can be a painful condition. Physical changes in the eye are generally not apparent, but cataracts have many other indicators. These include:

Types and differences of cataracts

Cataracts are generally described as being age-related (senile) or secondary. Age-related cataracts are the most common kind of cataract and are the result of the natural aging process. Despite their name, they can happen at any age, though they become more common as people get older.

Secondary cataracts are due to causes other than aging. These factors include diabetes. Cataracts can also result from:

Cataracts can also be classified according to their location in the lens. These types include:

These develop slowly in the center of the lens. In early stages they may cause nearsightedness. Patients may experience a temporary improvement in reading vision, “called second sight,” that ends as the cataract worsens. Nuclear cataracts may especially impair night vision and can significantly dull the appearance of color. Nuclear cataracts are the most common age-related cataract.

These usually form in the back of the lens. Subcapsular cataracts may reduce reading vision, impair vision in bright light and create the perception of halos or glare around lights at night. They generally develop faster than nuclear cataracts.

These begin on the edge of the lens and can expand toward the center. Cortical cataracts may especially affect focusing, glare and perception of contrast.

Mixed opacity, sometimes used to refer to any combination of the above, is common.

Risk factors and causes of cataracts

The most common cause of cataracts is aging. Over time, proteins in the lens of the eye form clumps that reduce the amount of light received by the retina. Additionally, the clear lens can slowly take on a yellow or brown discoloration with age. This changes the appearance of certain colors, such as blues and purples.

Older adults with a history of systemic health conditions, such as diabetes, allergies and pneumonia, are at an increased risk of cataracts.

Other potential causes of cataracts include:

There are also several factors that can increase the risk of developing cataracts.

Cataracts are diagnosed through a comprehensive eye exam given by an ophthalmologist. This may include:

Various other tests may also be conducted to test for co-existing health conditions, such as diabetes or high blood pressure, which may accompany cataracts.

People can compensate for early-stage cataracts by using stronger contact lenses or glasses, anti-glare sunglasses, magnifying glasses and brighter lights. If these steps do not help, the only treatment for cataracts is surgical removal.

The ophthalmologist may recommend waiting a period of time before undergoing cataract surgery. The National Eye Institute (NEI) suggests that surgery may not be necessary unless the loss of vision disrupts daily activities. Studies have shown that delaying surgery rarely causes long-term damage to the eye. However, some cataracts may need to be removed even if they do not impair vision. This is usually the case if the patient has other eye diseases such as diabetic retinopathy or glaucoma, which may be more easily treated or monitored if cataracts are removed.

Patients need to disclose their medications in advance of the surgery. A recent concern is alpha blockers, a class of antihypertensives. Alpha blockers are often prescribed to treat prostate enlargement (benign prostatic hyperplasia, BPH), a common condition in middle-age and elderly men. Researchers have found that alpha blockers can cause the iris, one of the colored parts of the eye, to become floppy during cataract surgery. This condition, known as intraoperative floppy iris syndrome (IFIS), can constrict the pupil, which needs to be dilated during the operation. IFIS has been noted in some patients who stopped taking alpha blockers as long as five years before their operation.

Surgical complications can result if the surgeon is not prepared for the possibility of IFIS. However, advance notification that a patient has taken alpha blockers can permit use of modified surgical techniques that have a successful outcome. Alpha blockers are safe and effective treatments for BPH, but patients using them should notify their ophthalmologist before their surgery, according to the American Society of Cataract and Refractive Surgery, the American Academy of Ophthalmology and the American Urological Association.

Cataract removal is one of the most common, safe and effective surgeries. Usually the patient can go home the day of surgery. About 98 percent of patients enjoy better eyesight afterward. If cataracts need to be removed in both eyes, the operations are typically performed apart.

The 15-minute procedure is performed under local or topical anesthesia in a hospital or ambulatory surgical center. The ophthalmologist makes an incision in the cornea (the clear front of the eye) and removes the lens, after breaking it up with special ultrasound, called phacoemulsification.

Usually the lens is replaced with an artificial lens implant that cannot be felt or seen, requires no care and becomes a permanent part of the eye. Patients who cannot have an artificial lens because of complications such as other eye diseases may instead be prescribed glasses or contact lenses.

Following the surgery, patients may need to wear a patch over the eye to allow it to heal. The physician may also prescribe corticosteroids, nonsteroidal anti-inflammatory drugs (NSAID) and antibiotic eyedrops with directions on their use. After the operation, patients may perform minor activities such as walking and climbing stairs but should avoid activities that may increase pressure in the eye, such as lifting heavy objects. Follow-up physician visits may be scheduled to check the patient’s recovery.

People with diabetes tend to have more complications from surgeries, including cataract surgery. Complications include the possibility of infection and bleeding and a slightly increased chance of a detached retina. These complications may lead to loss of vision if left untreated.

Patients who have an artificial lens implanted sometimes develop an after-cataract. An after-cataract is clouding of the eye tissue that forms around the synthetic lens. This may develop months or years after the implant and is usually resolved with a painless laser treatment.

Although cataracts are usually the result of the natural aging process, individuals can take several steps that may help prevent or delay the development of cataracts. People who are at risk for cataracts, such as older people and people with diabetes, should protect their eyes as much as possible.

This may include taking steps such as:

People may also be able to reduce their risk of developing cataracts by changing their lifestyle (e.g., stopping smoking, not abusing steroids or alcohol) and controlling high blood pressure and other diabetic risk factors.

Some studies have suggested that the risk of cataracts can be lowered by eating or avoiding certain types of foods. A diet rich in antioxidants such as vitamins E and C may help, according to the American Academy of Ophthalmology (AAO). Some government research has noted a link between carbohydrates and cataracts that implies that restricting carbohydrate intake may reduce the risk of some forms of cataracts.

To promote early detection of cataracts and other eye diseases, high-risk patients, such as people with diabetes, should have a comprehensive eye exam regularly to check for cataracts, glaucoma, diabetic retinopathy and other disorders.

The American Diabetes Association recommends that people with diabetes have a dilated pupil exam:

Questions for your doctor regarding cataracts

Preparing questions in advance can help patients have more meaningful discussions with their physicians regarding their conditions. Patients may wish to ask their doctor the following questions about cataracts: