The skin is the largest organ in the body. It consists of three layers – the epidermis, the dermis and the subcutaneous tissue. Hair and nails are both modified forms of skin. Welcome to the Skin & Hair Center, online source for information on skin-related conditions, diseases and symptoms.

Find out what you and your loved ones can do to improve your skin's health and appearance, as well as prevent serious conditions such as skin cancer. In this center you will find the answers to your concerns on all procedures, tests and surgeries for skin- and hair-related conditions. 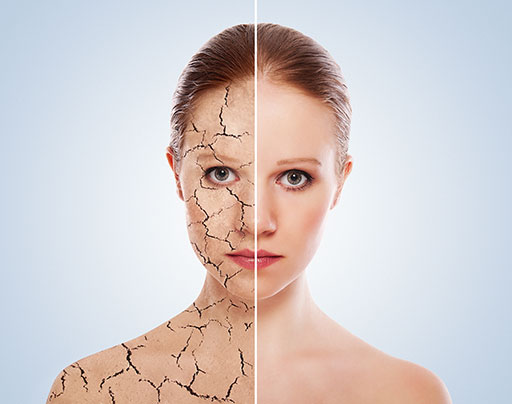 Proper skin care is vital to good health and techniques such as shaving and piercing are forms of personal expression. Skin damage can occur through sun exposure, smoke exposure or frostbite (associated with extreme cold) as well as daily life (e.g., corns, bunions and calluses). Skin trauma (or injury) may include bite wounds, bruises, burns and cuts or other common wounds. Sunscreens can help prevent damage. This is most important in patients who are sensitive to sunlight (photosensitivity) such as xeroderma pigmentosum or polymorphous light eruption. Proper diet can also promote skin health.

Aging causes many skin changes, including sags, wrinkles and altered texture. Medications and procedures can improve the skin's appearance, a process known as facial skin rejuvenation. Damaged skin may be removed (such as through chemical peels and laser resurfacing) or enhanced (such as through Botox injections, soft tissue augmentation, blepharoplasty or fat transfer).

Alopecia (hair loss) is a condition that affects many men and some women. In cases of male pattern hair loss or female pattern hair loss, it is a natural process. However, in some cases a disorder or illness such as alopecia areata or telogen effluvium may be responsible.

Acne and blemishes are among the most common skin disorders. Typically, people experience outbreaks of blackheads and whiteheads. In other cases, people may experience slightly different skin conditions, such as keratosis pilaris or rosacea. Acne medications such as retinoids can help reduce symptoms. In severe cases, acne surgery may be necessary to help clear skin.

Laser surgery, cryosurgery, electrodesiccation and curettage, and intralesional injections are skin surgeries that treat skin problems that are not cosmetic in nature. Laser hair removal and tattoo removal often are used for cosmetic purposes. Some kinds of surgery (e.g., plastic surgery, skin grafting) may be either cosmetic or medically necessary.

Autoimmune skin diseases sometimes pose a serious health threat and may cause symptoms such as skin blisters or rashes. Psoriasis is a common skin disorder characterized by patches of raised, inflamed lesions. Conditions such as epidermolysis bullosa may range from very mild to potentially life-threatening while diseases such as scleroderma are potentially disfiguring.

Some skin growths are cancerous, such as those related to Bowen disease. Most are benign, such as angiomas, prurigo nodularis, pyogenic granuloma, steatocystoma multiplex and seborrheic keratoses. Some growths, such as keratoacanthomas, resemble cancerous tumors and should be checked by a physician. Growths may resemble rashes with raised bumps or scarring, such as keloids.

Skin discoloration results from several factors. Some are natural, such as birthmarks. Others are related to factors such as sun exposure (e.g., disseminated superficial actinic porokeratosis, hyperpigmentation) or allergy or immune reaction (lichen planus). The skin can become darker (e.g., acanthosis nigricans, progressive pigmentary purpura) or lighter (albinism, vitiligo).

Skin discoloration results from several factors. Some are natural, such as birthmarks. Others are related to factors such as sun exposure (e.g., disseminated superficial actinic porokeratosis, hyperpigmentation) or allergy or immune reaction (lichen planus). The skin can become darker (e.g., acanthosis nigricans, progressive pigmentary purpura) or lighter (albinism, vitiligo).